India HIV/AIDS Alliance was honoured at this year’s India NGO Awards in a memorable ceremony in New Delhi last week for demonstrating best practice in resource mobilisation, financial management, organisational governance and community impact.
The India NGO Awards is a programme of the Resource Alliance and the Rockefeller Foundation, one of the world’s leading foundations and supporters of civil society. The award is intended to acknowledge and support best practice in India’s NGO sector.
Out of almost 150 organisations nominated, Alliance India was one of 11 finalists. At the awards ceremony, Alliance India was selected as the top NGO representing the north region in the large organisation category. Notably, we were the only organisation among the finalists focused on supporting the HIV response. (-more-) 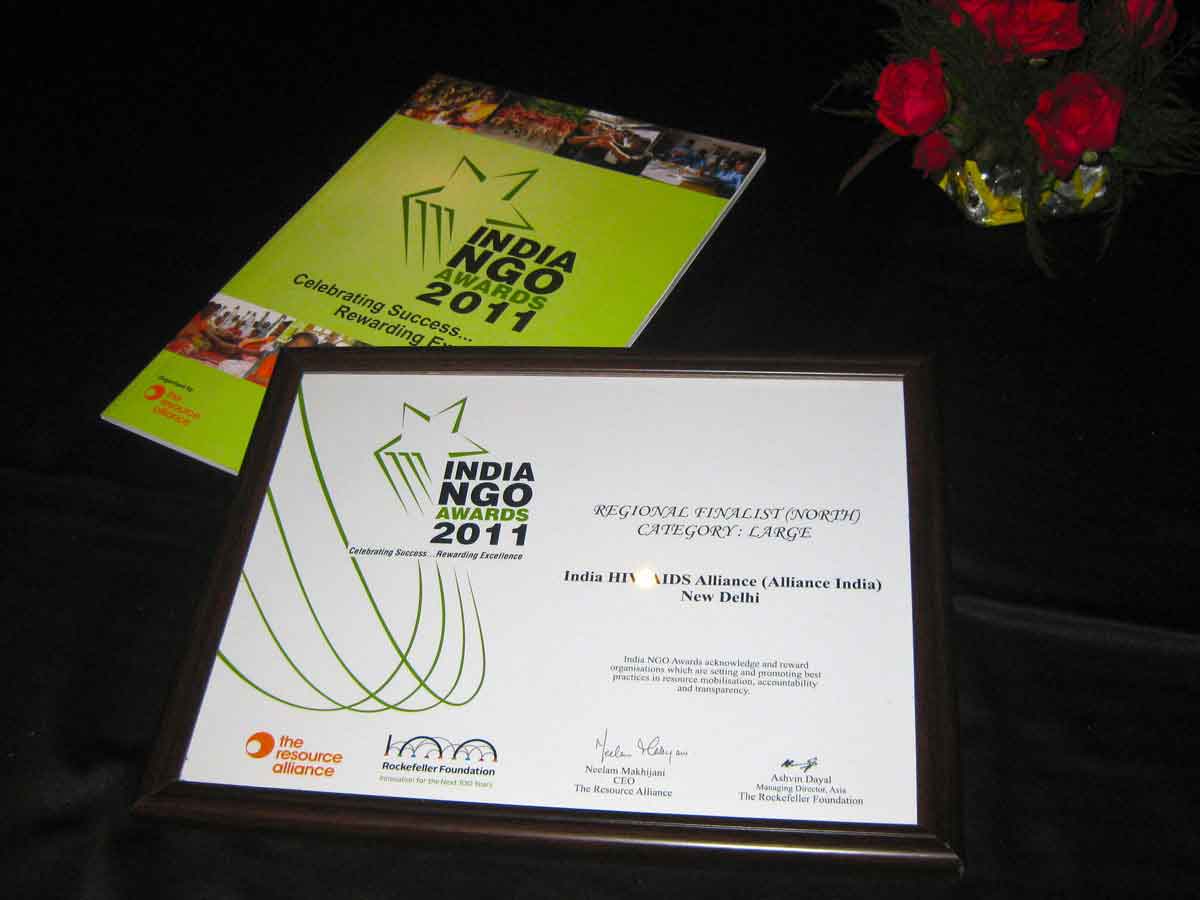 To put this honour in perspective, the seven states in the north region of India have a population of more than 300 million people, roughly the same size as the United States, and India’s civil society is one of the largest in the world. Competition was considerable, and the quality of the field was quite impressive.
The awards, which have been given since 2006, welcomed Ms. Ambika Soni, the Honourable Minister of Information and Broadcasting as the Chief Guest. Mr. Ashvin Dayal, Managing Director, Asia, the Rockefeller Foundation, and Ms. Neelam Makhijani, CEO, the Resource Alliance, shared the dais and spoke eloquently about the vital role of the NGO sector and the need for high standards of accountability and transparency.
Alliance India is deeply grateful to be recognised by the India NGO Awards. HIV/AIDS remains a serious concern for India, and too often, the communities most affected by the epidemic—men who have sex with men; transgender people; sex workers; people who use drugs; and people living with the virus—are neglected. This award affirms the vital role that these communities play in our work and recommits us to meeting the challenges of HIV/AIDS.
About India HIV/AIDS Alliance: Alliance India is a diverse partnership that brings together committed organisations and communities to support a sustained response to HIV in India. Complementing the national programme in India, it works through capacity building, knowledge sharing, technical support and advocacy. Through our network of partners, Alliance India supports the delivery of effective, innovative, community‐based HIV programmes to key groups affected by the epidemic.