Advocating for Cervical Cancer Testing for Women Living With HIV: Experiences from the Koshish Programme in India 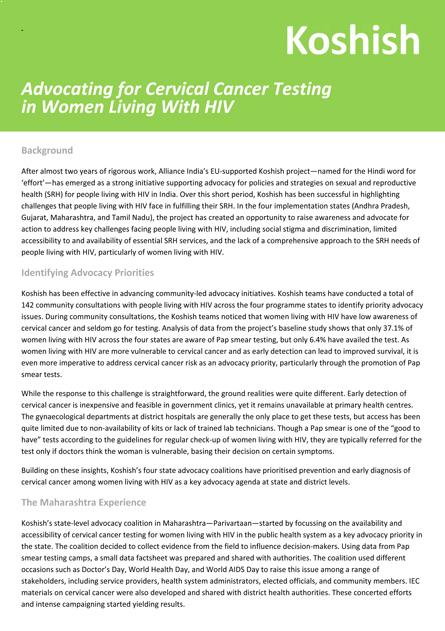 Sexual & reproductive health (SRH) services must respond to the specific needs of people living with HIV (PLHIV). Unfortunately, this is typically still not the case in India. PLHIV face barriers in accessing basic SRH services or have needs that go beyond mainstream services.

After almost two years of rigorous work, Alliance India’s European Union‐supported Koshish programme — named after the Hindi word for ‘effort’— has emerged as a strong initiative to support policies and strategies on SRH for PLHIV in India. Our new case study ‘Advocating for Cervical Cancer Testing in Women Living With HIV’ highlights these efforts to address the challenges that PLHIV face in fulfilling their SRH needs, in this case concerning access to Pap smear testing for women living with HIV (WLHIV).

WLHIV are more vulnerable to cervical cancer and as early detection can lead to improved survival, it is even more imperative to address cervical cancer risk as an advocacy priority, particularly through the promotion of Pap smear testing. In the programme’s four implementation states (Andhra Pradesh, Gujarat, Maharashtra, and Tamil Nadu), Koshish advocacy coalitions have prioritised prevention and early diagnosis of cervical cancer among WLHIV as a key advocacy agenda at state and district levels. The partners have initiated advocacy efforts to make Pap smear testing a mandatory part of the care for every WLHIV and, in doing so, expand its availability to all women.

Read more about this effort here.

India HIV/AIDS Alliance works closely with PLHIV in India through its Koshish programme which strengthens civil society organizations and networks that represent and work with PLHIV and other marginalized groups, such as MSM, transgenders, sex workers and IDUs, to effectively advocate for policies to improve the sexual and reproductive health and rights of PLHIV in India. This project is funded by the European Commission and is implemented in partnership with MAMTA, PWDS, VMM and CHETNA, along with state-level networks for PLHIV in Maharashtra, Tamil Nadu, Andhra Pradesh and Gujarat.