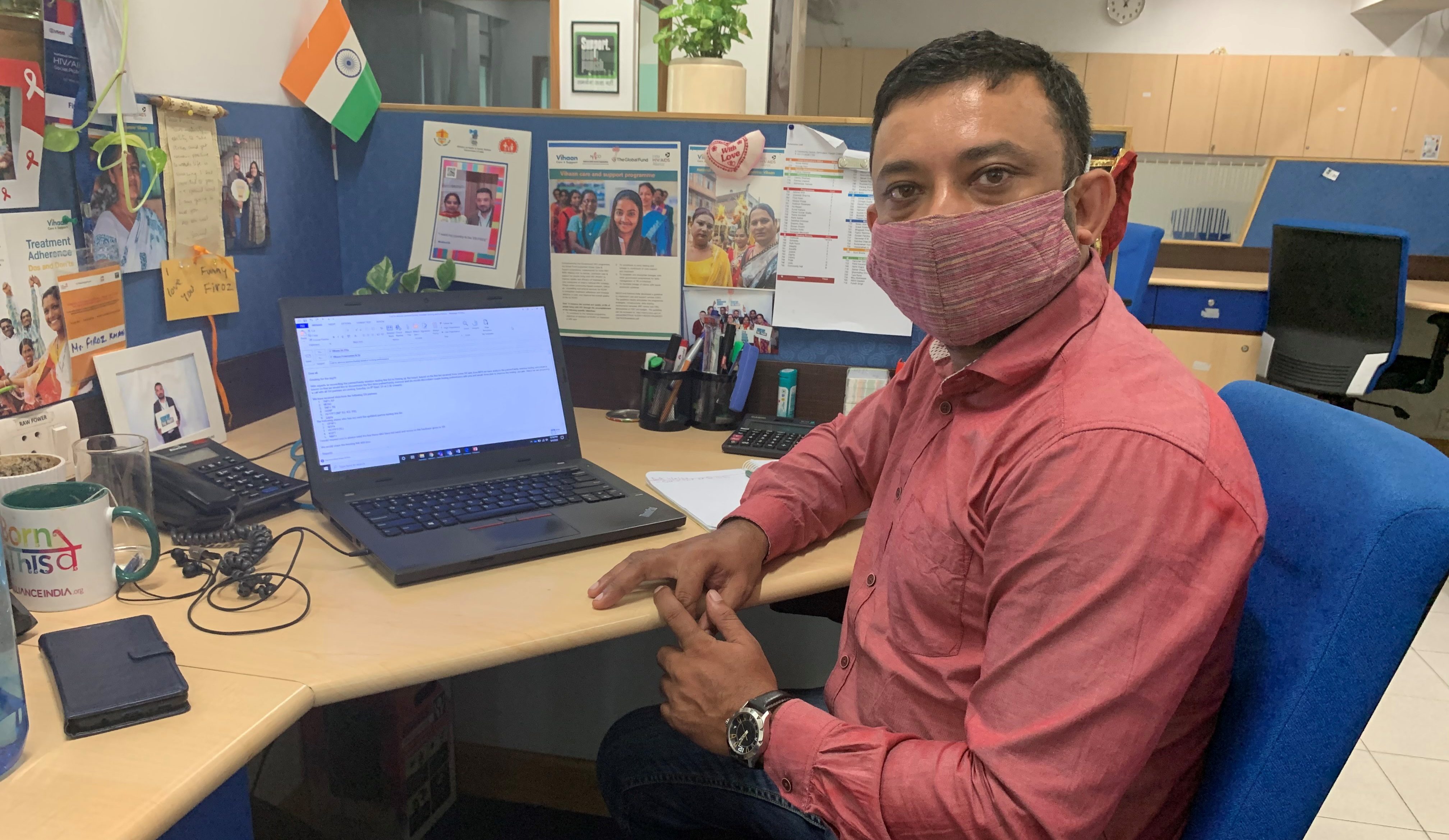 It was unusually calm and quiet outside but inside Firoz’s home, it was just the opposite; his mobile phone was buzzing, a lively zoom meeting streaming on the laptop screen, email notifications popping up, the pressure cooker whistle blowing in the kitchen, and chitter-chatter from his mother and 12-year-old daughter filled the room. The line between professional and personal life was blurring and working hours stretching beyond the usual eight hours. Firoz picked up the phone, the call was from a distressed man in Himachal who needed to restock his antiretroviral medicines but was not able to access due to the nationwide lockdown. In his frustration, he was speaking rudely and demanding an urgent solution. Firoz asked him to be patient and assured him of help as soon as possible.

No one can understand the plight and fears of people living with HIV better than Firoz himself. He is an HIV survivor and has been actively contributing to the HIV response in India for more than a decade. His community leadership is recognized at the national level and he is part of several state-level networks of people living with HIV. During the lockdown, people from all over the states called him for help and he couldn’t ignore their requests whether or not they were from the states he is in charge of, he extended help to as many as he could.

Firoz is a programme officer with Alliance India’s Vihaan programme supported by the Global Fund for AIDS, TB and Malaria and implemented to support the national HIV response. The programme provides care and support services to people living with HIV in 28 states and 4 union territories. He is part of a small national team that drive the programme. He is in charge of providing leadership to 79 Care and Support Centers administered in six states with four partners. Some of the larger states that have scattered PLHIV population were tough to manage in the recent lockdown situation as the nearest place of accessing ART medicines were about 70 to 80 kilometres away. Some of the ART Centres were closed and converted into COVID 19 centres and the PLHIV were re-located to other ART Centres but people were not aware of the change. Public transport was unavailable. Firoz and his state teams identified new distribution centres in communities reducing the distance from 80 km to just 15 km for people living with HIV. In Telangana and Andhra Pradesh, the distance was further reduced to 3-5 kilometres making ART medicines available at a walking or cycling distance. In states like Madhya Pradesh, there are 51 districts and each ART covers 4-5 districts. So adding new distribution centres helped increase access to ART medicines, and looking at the uncertainty of the lockdown, three-month dispensation of medicine was being given.

One of the most important roles played by Firoz during the nationwide lockdown that extended to more than three months in some districts was to keep a close eye on the new developments, co-ordinate with the state and district teams, and report back to the national team who whenever necessary advocated with the national programme – National AIDS Control Organisation for appropriate policy advocacy and swift response.

Advocated and ensured food supplies for families who had no food

“Initially, I used to attend emergency calls round the clock. But as things got more streamlined, people were contacted and informed with correct information, the number of these urgent calls began to drop”, says Firoz. Finally, the HIV positive man from Himachal also received ART medicines after Firoz spoke to the Himachal State AIDS Control Society. “During the lockdown, we advocated with government machinery such as the State Health Department and Ministry of Food and Public Distribution to provide additional assistance to people living with HIV”. “One day, I received a call from our outreach worker in Rajasthan. He narrated the dire situation of a PLHIV family who had not eaten for three days. The children were surviving on just rice and water. Through the active advocacy by our partners, the Rajasthan government provided food supplies to 25,000 individuals based on their ART record book. Similarly, in Delhi, 150 families were provided with food supplies. This ensured, that the families especially those on strong ART medicines don’t have to go hungry.

Fear and anxiety among people living with HIV

During the lockdown, outreach workers were actively calling and visiting people living with HIV. There was one instance when the individual got very stressed and threatened to commit suicide if anyone from our centre called or visited. The person feared that questions will be raised by the family or neighbours who were unaware of the person’s HIV status. In some instances, the HIV status of a person became known because of the catastrophe and the family members had to be counselled and ensured that it didn’t escalate to serious conflict within the family. A young HIV positive girl from Kozhikode district in Kerala avoided our outreach workers until she fell gravely ill. Our field team rushed her to the hospital where she was found positive for tuberculosis. She then had to be initiated on both HIV and TB treatment.

People who went without ART medicines for more than a week began to worry about developing drug resistance. Which means, the first set of HIV treatment won’t be effective and they will have to move on to the second set of HIV treatment. In HIV treatment, it is desired that people stay on the first set of treatment for as long as they can in life because the medicine options are limited. Firoz and his team spent hours and hours on the telephone to speed up the delivery of ART medicines.

“We were receiving calls from families who were afraid to step out of their homes fearing COVID-19 infection. We had to reassure them and guide them to take preventative measures. Most low-income families are able to bring food on the table only because they work for the day, going out of jobs for more than three months meant surviving on the generosity of others”, says Firoz who interacted with hundreds of PLHIV during the lockdown and mobilized resources from the community itself who were in a better position and could help.

Our outreach workers across the country were out and about travelling long distances in cycles, motorcycles, private cars using all possible means to deliver ART medicines to the nearest locations or home delivery for special cases, for example, those critically ill or children. It was important for us to keep our outreach workers motivated and allow them a forum to share their challenges as well. A national-level virtual meeting was organized on regular basis to touch base with the state teams. During these meetings, some of the outreach workers shared their stories that inspired and motivated others.

The joy of helping others 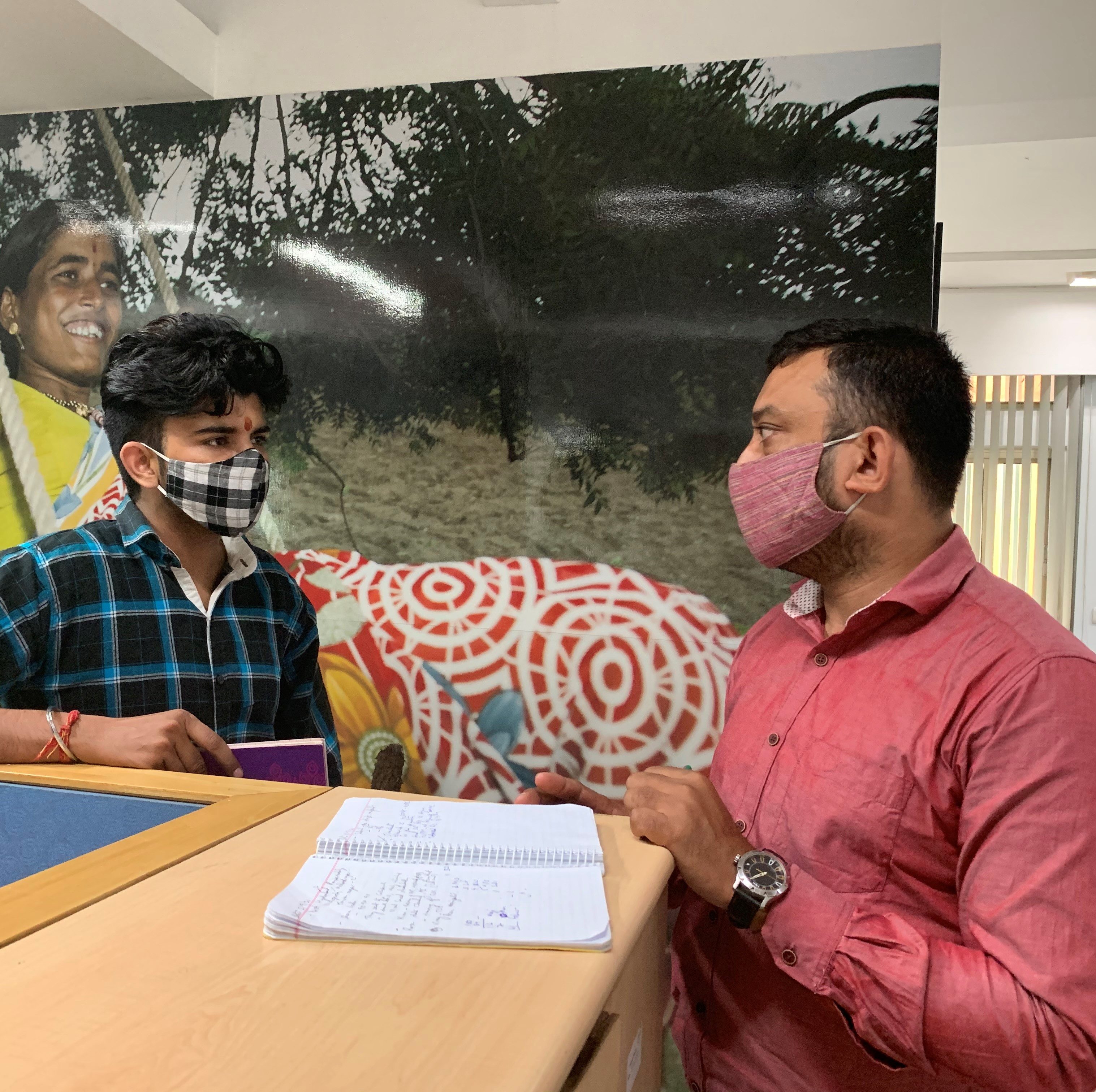 Firoz interacting with a colleague in Alliance India office, Delhi

Sitting in Delhi in the comfort of his home, Firoz felt he was not doing enough for his community. He then took the responsibility of delivering ART medicines to about thirty PLHIV in and around his area. “A crisis has a way of uniting us. In the last few months, I was able to connect with friends I had not connected for years. The community networks were active, encouraging and helping one another. It gave me great joy to bond once again”, shares Firoz. He also got to spend quality time with his daughter and mother. As a family, they explored new recipes and expanded their beautiful balcony garden.

Now that the lockdown is over, has the risk and vulnerabilities of people living with HIV now over, we asked Firoz. “Far from over. Yes, we did a great job at reducing the vulnerabilities and therefore minimizing their suffering but the risk is far from over as COVID-19 continues to be a real threat to not only public health but to our economy. The majority of the 1.4 million PLHIV registered with Vihaan programme are from poor communities. Their struggle for survival will have a direct impact on their adherence to treatment. It could derail the progress we have made in improving treatment adherence and minimizing HIV mortality. Therefore, we need to keep a close eye on the situation and ensure the PLHIV community receives additional assistance to survive this crisis without losing the gains we have made so far”, says Firoz.

Vihaan (meaning dawn in Hindi) programme enhances treatment adherence and retention in HIV care for People Living with HIV (PLHIV) in India. The programme serves nearly 1.4 million PLHIV through its 319 Care and Support Centers spread across 28 states and 4 union territories in India.