Our Reflection on World Health Day 2021 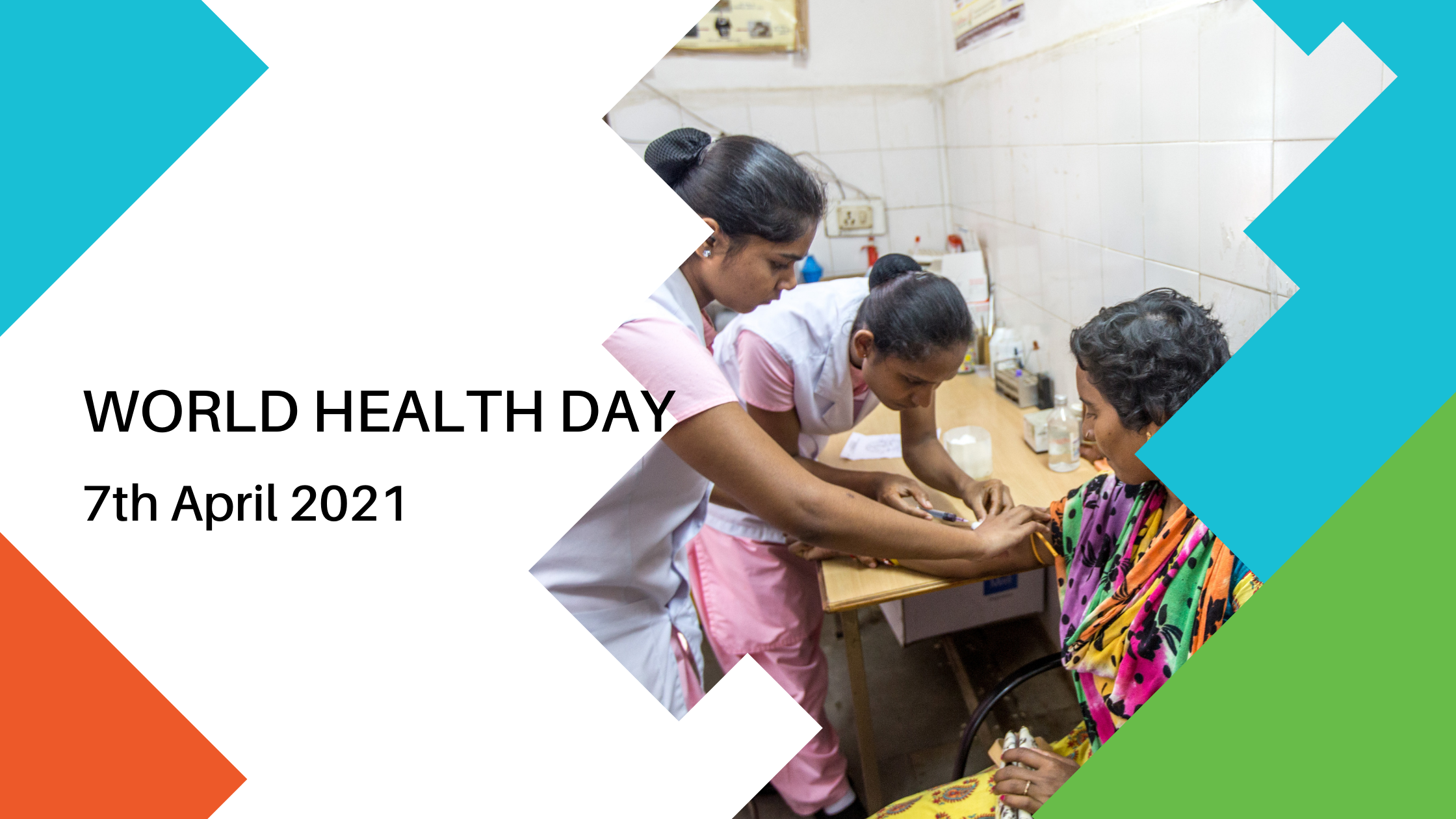 April 7th is observed as World Health Day to underscore the importance of equity as well as the quality of healthcare services. India has one of the lowest allocations to health among all countries of the world as a percentage of its GDP. As a result of low investment in health and due to high out-of-pocket expenditure by individuals, 85.6% – which according to the World Bank is one of the highest in the world, nearly 60 million people are pushed further into poverty[1]. According to eminent Social Scientist and author of the book, “Everybody Loves a Good Drought”, P. Sainath, “poor access to public health is the leading cause of rural indebtedness in India”.

In 2016, India scored 41.2 points, 100 being the best, on the healthcare access and quality (HAQ) index created by the Global Burden of Disease study published in the medical journal The Lancet, 2018. India lagged behind its neighbours like China, Bhutan and Sri Lanka in the provision of quality healthcare.

The Union health budget has seen little increase from 0.31% to 0.34% of GDP for 2020-2021, and 1.2% of GDP for 2021-22, still far behind from attaining 2.5% of GDP as recommended by the National Health Policy. Again considering the GDP shrunk by 7.5% in the current year, the increase in the percentage of GDP will be marginal. In the Union budget 2021-22, although Rs 2.23 lakh crore (approximately 30 billion) is proposed towards health and well-being, the budget also includes a one-time investment for COVID and increased investment in research. The spending will include a new centrally sponsored scheme, the PM Atmanirbhar Swasth Bharat Yojana (PM’s Health Scheme) to strengthen the health infrastructure of the country.

Commenting on the impact of low health investment on vulnerable and marginalised population, Fazlur Rahman Gulfam, a senior strategic analyst at Alliance India says, “even the lowest investment in the health infrastructure is not directed entirely for the vulnerable and marginalised population groups such as transgender women, men who have sex with men, women engaged in sex work, people living with HIV, Tuberculosis and other morbid conditions or even drug user population. India has one of the largest public health systems in the world simply because of the size of the population, (since the health infrastructure is established in accordance with the population size) a major share of the health investment goes into only operating and maintaining that entire infrastructure. Whereas the marginalised and vulnerable population groups are neither welcome there nor can they can access it because of prevailing stigma and discrimination, lack of expertise to address their problems and lack of adequate infrastructure to resolve their issues.”

How can we minimise the negative impact of insufficient health investments and ensure the most vulnerable and marginalised populations have access to healthcare services? He suggests, “We should have separate centrally sponsored schemes and programs for such population groups. For example, when the investment in healthcare is low, it will have a direct and very severe impact on the HIV program and within the HIV program particularly on commodities like condoms for prevention and life-saving ART drugs for people living with HIV. And we have seen that happening in past as well, whereas, the rest of the world is adding effective tools to prevention combination basket – such as PrEP and PEP, we are still struggling to have an adequate number of condoms and HIV screening kits.”

Besides HIV, TB and Malaria, non-communicable diseases are the leading cause of death in the country, contributing to 60% of deaths. In 2019, an estimated 58,960 people lost their lives to AIDS[2], 79,144 lives were claimed by TB[3], and recently 159,000 (as of 18.03.2021) deaths due to Covid-19. The loss of lives is the loss of immense potential and human resources apart from the huge and irreplaceable personal tragedies. The investment in health will act as a bolster for a better economy in the long run since healthy people results in an active workforce.

According to Thota Maheshwari, Senior Programme Officer at Alliance India, “The biggest gaps in Indian public healthcare system has always been insufficient manpower and infrastructure, especially in rural India.  Capacity building of the healthcare teams is another huge gap, often it is observed that the medical and paramedical team are not updated with latest developments or innovations in the healthcare.” Adding to the discussion Fazlur Rahman Gulfam says, “While the quality of healthcare services is always in question, it is important to address these gaps to be able to provide quality and affordable healthcare to the population. As a country we must invest more in healthcare infrastructure development, creating trained and efficient healthcare staff and providing healthcare financing to people from the low and middle-income groups. While providing financing, it is important to undertake adequate research to understand the intricacies of healthcare investment on different income levels as well as devising a mechanism that focuses on people’s actual needs. Special provisions and policies should be introduced for people from marginalized sections. Their needs and specific conditions should be taken into consideration while introducing such policies. More emphasis should be given on investment for prevention healthcare infrastructure and services than curative. However, curative healthcare infrastructure facilities should be made available to populations living in rural areas, difficult terrains and from indigenous groups.”

“Another strategy to reduce the health disparity could be to strengthen better coordination and referral mechanism between the public and private healthcare providers. Strict adherence to periodic monitoring mechanism is required to control quality healthcare for all”, adds Thota Maheshwari.

Building a fairer and Healthier India

India has taken huge strides in improving health indicators such as life expectancy, infant mortality rate, maternal mortality rate etc. as well as substantial gains in eliminating epidemics such as polio, leprosy, HIV and TB. The increasing reach of healthcare services, extensive health campaigns, improved immunisation and growing awareness has shaped better health outcomes for the country. The infant mortality rate for India in 2020 was 29.848 deaths per 1000 live births, a 3.48% decline from 2019. The under-five mortality rate in India declined to 34 in 2019 from 126 in 1990 according to a UNICEF report[4]. India is the only high endemic country to report malaria cases decline of 17.6% in 2019 against the previous year[5]. A robust national HIV programme has resulted in a reduction of annual new HIV infections by 37% between 2010 and 2019 in comparison to the global average of 23% across countries in the world. Similarly, during the same period, AIDS-related deaths have declined in the country by almost 66% in comparison to the global average of 39% decline[6]. Still, a huge disparity in the availability and accessibility of healthcare resources persists in India. What healthcare reforms could help improve various indicators of health, such as share of out-of-pocket-expenditure, equitable and good quality access to healthcare, availability of infrastructure and human resources for health? According to Fazlur Rahman Gulfam, the revelatory lessons learnt from Covid-19 is exactly what we need to create a robust healthcare environment, these include:

“In countries like India, people cannot access testing and treatment because they are unable to pay, live too far from health services, or are denied access due to stigma or discrimination. Such shortcomings undermine the pace of progress in the fight against existing diseases and impede an effective response to infectious disease outbreaks. Together with the government, civil society partners and private stakeholders, we need to strengthen health systems so they can test, track and treat for the virus now and be prepared to roll out vaccines; procuring and distributing COVID-19 diagnostics as well as therapies once available for masses; protecting front-line health workers with personal protective equipment; and adapting lifesaving disease programs so they can safely continue” he further elaborates[1].

Working in the HIV programme for several years, Thota Maheshwari vouches for innovative elements of the HIV response including structured community mobilization, targeted social protection, and differentiated healthcare delivery as key strategies that can be utilised for an integrated approach for equitable and good quality access to healthcare.