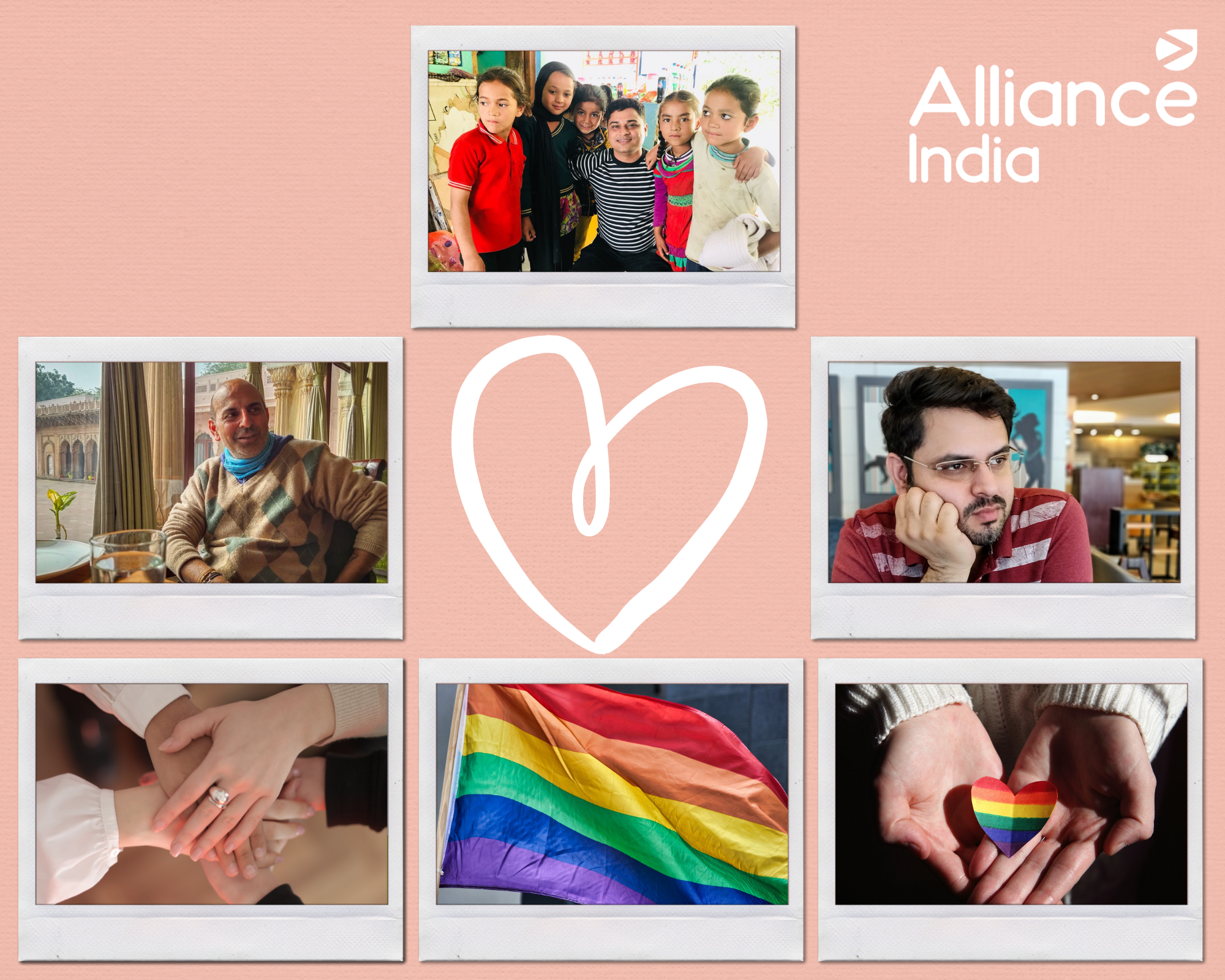 Every year in the month of June, we celebrate Pride Month globally where we celebrate our friends and family members who identify as Lesbian, Gay, Bisexual, Transgender, and Queer (LGBTQ). This Pride month we bring the stories of three gay persons who overcame societal barriers and are truly proud of their choices.

Ranjan Koul is working as an HR professional in an international humanitarian organisation based in New Delhi. At the age of 11, Ranjan started realizing that he was attracted to men rather than women.

‘’I did not understand this and initially thought it was fine, though I felt that I was the only one like this as no one talked about it. I started reading and saw that this was not acceptable and was looked at as an abnormality. This made me feel that something was wrong with me that needed to be corrected.’’, says Ranjan.

Strategic Analyst by profession, Gulfam Hasan from a very young age knew that he was different from other boys of his age. Since he was different, he started doing everything differently- he would only play the games that his sisters played. He would just always be around with them and their female friends to stay under their protection because other boys made fun, called names and tried to hurt.

“At some level, I wanted to be like other boys of my age, I tried also, but it wasn’t easy because I had no interest in playing cricket or talking about girls in my adolescence. But I always tried to fit in, made efforts to be accepted and hated myself from the inside for doing so.”, recalls Gulfam.

Many times even family members would make fun of Gulfam and usually called him by different names and forced him to do things that he didn’t like such as going out and playing with other “guys”. He remembers that he would just go out, sit at a corner and watch them play – often depressed and eyes full of tears.

Shabih Anwer works as a development professional in New Delhi. For him, the realization of being different came alongside the spontaneous and intermittent, mutual and noncoercive sexual engagements during his childhood days. It was during the onset of his adolescence, he started realizing that his fondness and fancy towards boys and men were typically not similar to most boys and men around him.

“Almost all my existing partners in the sexual acts from my childhood days, and new partners starting from adolescence, who were generally elder to me, either expressed their likings toward girls or made me feel like one during the sexual acts and otherwise. This left me confused about the (our) role of sex (biological sex) in our fondness towards each other, and their perceived taste for sex with me (a person of same biological sex).’’, feels Shabih.

“I god muddled even more during around my 15th and 16th year of age, which was also the time (2000 – 2001) when the internet became accessible to the middle class in Indian households although still costly and one could access transnational information about the cultures and societies from across continents. One of the prime reason for the confusion was that a couple of my so-called ‘straight’ (post-colonial/western term – new for my generation at that time) friends/partners expressed their emotions for me and their inability to deal with their own emotions amidst the heteronormative society, by saying that they want to/think about marrying me after getting my sex changed. Thinking about it now, I presume they were masking themselves to conform to the masculine and heteronormative surroundings. It was during these times when I perceived myself as different from the heteronormative world and it was late until around my early adulthood that I became conscious of my sexuality.”, Shabih adds.

Ranjan boldly divulges that he has not experienced stigma. He was clear in his mind what he is and accepted himself. He refused to let anyone make fun of him because of his sexuality.

“Though I did not advertise the fact that I am gay but if someone asked me I was honest and said yes. I did lose some friends but that did not stop me. I stood up for myself and had friends who stood up for me.”, states Ranjan.

“For the past 30 odd years, I am totally out and do not hide this side of me. If people do not like it they can move on.”, he adds further.

Shabih feels that he has faced social stigma in the past and continues to experience it. One of the initial times, he had experienced social stigma was from his very first psychologist. This was before he came out as gay to his family. After a lot of courage and trust when he told the psychologist about his sexual preference, he asked him if he can stand in a square in his neighbourhood holding a placard written that he is gay, only then he would talk further if his sexual preference is acceptable and not a disorder. Although it left Shabih crying at that time and further stirred the question of his being ‘normal’.  Shabih was mature enough to make out the homophobic nature of the psychologist and later asked his parents to stop taking his services soon after the incident.

Gulfam remembers well, when he was in 5th standard, one of his classmates didn’t want him to sit next to him because he said- ‘I am a girl and I am a chhakka’. When Gulfam tried to argue with him and fight back, his classmate chopped his calf muscle with a shaving blade. The cut was extremely close to a nerve and Gulfam lost a good amount of blood. Later, he was taken to the hospital and then to home by school teachers.

“I clearly remember that there was a phase in my life when I was severely depressed because I was not fitting in anywhere I went – family, friends, school, hostel, and relatives nowhere. I would just sit at home at a window and keep staring outside for hours and hours without doing anything, without eating food or even without talking to anyone, not even my siblings. I just wanted to be able to finish it somehow either by correcting it or by finishing myself because I was simply not able to handle the rejection, mockery, name-calling, being a constant subject of making fun for everyone. I would simply cry several times a day and would just pray to God that He may show some miracle. I was helpless, ashamed, sad and depressed.”, recalls Gulfam.

Required support- Is it available?

More than half of the LGBTQ children drop out of school because they cannot deal with the trauma, they leave jobs because they are subject to discrimination, they give up their lifelong friendships because that one friend they thought will understand, didn’t understand and gave them a crying shoulder. Quite a few of them also take their own life as we all know. People should question themselves. All of this for what? All of this, why? ONLY because some people are different from others?

For Ranjan, the family was incredible support in the early years and that helped him a lot. Family and especially parents play a pivotal role in a child’s psycho-social development and preparedness to deal with adversities faced by LGBTQI children in and outside the family. These adversities range from homophobia, transphobia, getting bullied in the neighbourhood and educational institution, social exclusion, and associated psychological issues.

“For anyone who wants to support gay people please do not use the sentence ‘I accept you’. I hate that sentence as if I am something lesser to be accepted. We are not looking for your acceptance but unconditional support and love.”, Ranjan says.

“I would just want to tell everyone that when you see someone is different if you cannot make that person’s life better, the least you can do is to not make it worse. Because one thing is certain that the person is already dealing with a lot. You can never understand what kind of struggles that one poor soul is dealing with all alone and what all battles that one poor soul is fighting all alone against the entire world. Please just try to be good, and if you cannot even do that, don’t do anything bad to that person. And more importantly, if you see anyone doing anything wrong with that person try to stop it.”, urges Gulfam.

“In general parents need to have a healthy and loving relationship with their child, where the child knows that they are loved and can express their innermost feelings with their parents. In many cases, even then it is not easy for the child to express or talk about their thoughts, feelings and desires associated with sexuality and gender expression with the parents. The parents here need to educate themselves to get their child talking, but without pushing too hard.”, Shabih expresses.

The society that we are living in presently requires a change in approach so that voices and experiences of members from the LGBTQI community are present, heard and affirmed. This will only be possible when we support and promote positive role models within the LGBTQI population and celebrate their diversity.