‘Not a tomboy or not a lesbian but a transman’

Home > Resources > The Latest > ‘Not a tomboy or not a lesbian but a transman’
Blog
allianceindia 19 May, 2020 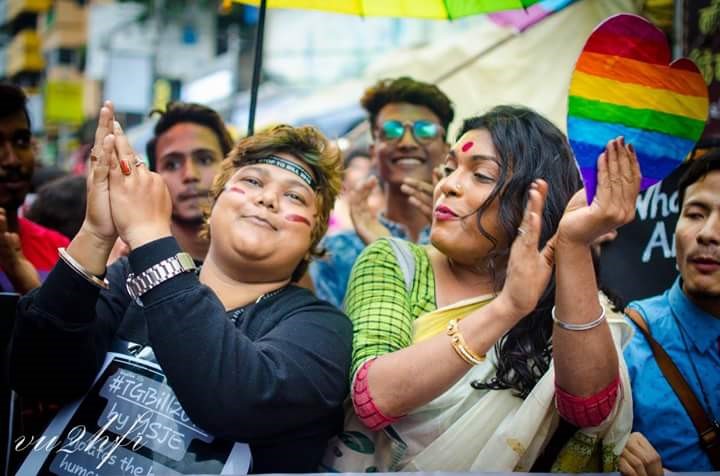 My preferred name is Shyam Ghosh. I identify myself as a 33 years old transman and today I want to share with you, my journey of transition from Shampa to Shyam. I hail from a conservative upper middle-class family. I stay with my mother; my two other siblings are married. For the past four years, I am associated with the Samarth Project of Alliance India.

For as long as I can remember, my body has always been a source of stress and friction. It never felt quite right. I started working on my appearance ― making changes to my hairstyle and binding my chest to make it appear flattened.

I started questioning my gender identity from a very young age. I remember while studying in the 5th grade, I was forcibly made to fit into the school uniform made for a female child. I did not want to wear that frock to school, somewhere deep inside, I felt really uncomfortable. It was emotionally draining and stressful for me and I could never explain my situation my family and gradually I started to become inattentive in my studies, my academic career was suffering. When I was in the 7th-grade physiological changes started to take place, which was another reason for my degrading mental health. Breast development, menstrual cycle, all of these troubled my psychology a lot. What I had almost forgotten to mention was the fact, my family, since my childhood days, dressed me up in male garments as a result of which I found it really awkward and uncomfortable when I was forcefully dressed up in a frock or a skirt for my school. Upon entering the 10th grade, I was more or less confident about my non-normative gender identity. I was confident enough to figure out the fact that I was a lot different from 5 other individuals whom the society labels as “women”.

I tried expressing my plight to my immediate family but all my efforts went in vain; nobody ever really made the effort to look at the situation from my point of view. For them, it was a casual and weird comment made on my part because of my age, they thought with increasing age I would slowly get over this “madness”. Yes, the confession of my non-normative gender identity seemed madness to my family. Throughout my life, I have been struggling to explain to my family that my biological identity is contrary to what I identify myself mentally. I have been trying my best to make my immediate family and friends understand that I am a man with the heart and soul of one trapped within the body of a female.

Life continued in this traumatic manner. Another traumatic incident took place in life when my family forcefully got me married at the age of 19, just after I finished graduation with one of my brother’s friends. My family thought that getting me married to a cis-male would cure my madness of addressing myself as a transman. The marriage turned out extremely toxic and I was exposed to marital rape several times. Inevitably, I became a patient of depression. My mental health was completely in shambles.

Months after this incident, I began counselling sessions under a psychologist. I attended the counselling sessions for 5 months after which I was referred to a psychiatrist. All my sessions took place in Kolkata. Within 6 months, I was back in my own house. I was not willing to stay confined within the four walls of the house throughout the day, I wanted to interact and be a part of the larger social world outside as a result of which I joined an electronics counter as a sales executive. It was during this job that I met transgender social activist Aparna Banerjee who visited our store as a customer. Over time, we got in touch and it was Aparna who actually helped me with my divorce proceedings. In 2011, I was finally able to convince my brother and got my divorce. Since 2012, I am living with my mother.

Also, 2012 has been a turning point in my life because of another incident. Aparna introduced me to the transgender community, I made friends in the community and gradually under Aparna’s guidance, I started to work with the community and for the community. In 2014, I quit the electronics sectors and joined Amitie Trust as a field mobiliser. This would not have ever been possible had Aparna not encouraged me initially.

My journey as a transgender activist began and I grew from a field mobiliser position to clinic manager which I am at present. This job, this particular field has given me all the love and respect which I have been deprived of since childhood. Also, I am presently undergoing the transition process.

Weight is a difficult topic for a lot of transmasculine people. Body fat accentuates all the feminine characteristics that can cause massive gender dysphoria for many transmasculine folks — curves, wide hips, and a large bust. In my case, when chest binding wasn’t effective enough, I constantly had to fight the urge to starve away my unwanted breasts.

I am constantly put in a position where I have to defend myself from accusations that my identity isn’t real, that I’m an attention seeker, or that I’m not trans enough to claim that label or be part of that community. Why? Because trans bodies are treated as public domain, available for open discussion and up for debate. Anything I say publicly about my body opens the door to people making unsolicited comments — comments like “you don’t really need to have surgery; you just need to lose weight!”

I identify as a heterosexual transman. Although I believe that gender can be fluid, I’m unable to understand how gay men can be attracted to other men. Similarly, gay men can’t understand how I am attracted to females. Perhaps this is why many trans people feel that they can never truly belong to the LGBTI umbrella. Gender identity and sexual orientation are completely different things. Still, the community should stand together.

Whenever laws and bills are passed regarding transgender rights, transmen are rarely called to the discussion table. Not once, have I been called, nor am I aware of other transmen who’ve been invited to sit with policy-makers. It’s as if the word ‘transgender’ in the Indian context is exclusively reserved to hijras and transgender women.

This isn’t all. I’ve been intimidated at transgender consultation meetings where hijras (trans women) have said I had no right to be there since my official documents state ‘Male’ and not ‘Transgender’. They assume I’m ashamed of the ‘transgender’ label and wish to disappear into the male species. Transwomen who easily pass comments for females aren’t spared either and are considered traitors. So, what can I as a transman expect? Sometimes I feel I am a nobody’s child.

It appears like the Indian transman has much distance to cover when it comes to achieving personal happiness, safety, and financial security.

Will this society allow them to blossom and realize what they were meant to be? Or will they forever be considered transgressors who left behind their female bodies in a rejection of the cis heteropatriarchy?