I am not straight, I like girls, not boys and will never like them the way I feel about feminine human beings

Home > Resources > The Latest > I am not straight, I like girls, not boys and will never like them the way I feel about feminine human beings
Story
Anurag Paul 6 July, 2021 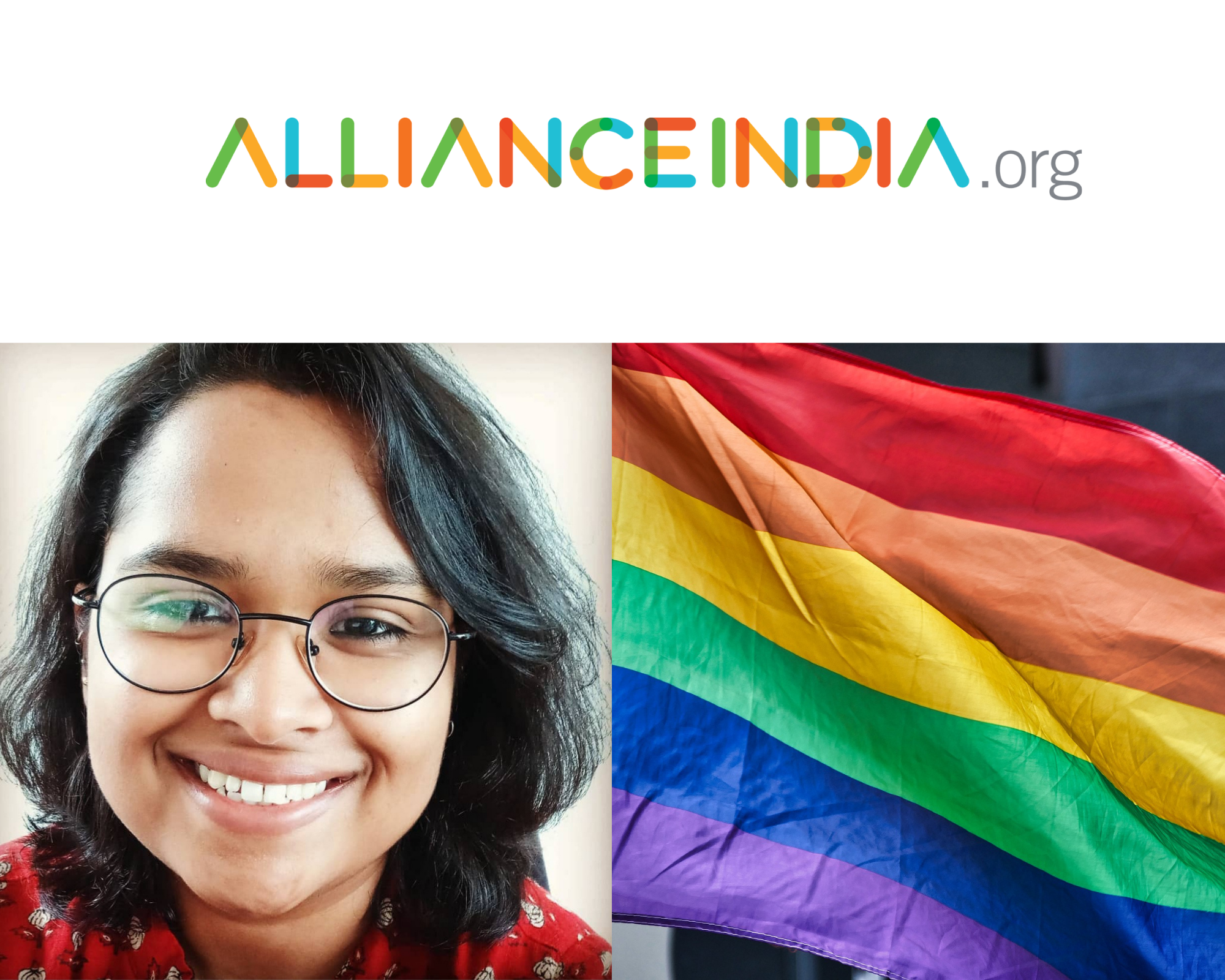 Dr Kasturi Chakraborti is a dentist and a public health researcher specialising in mental health research by profession. She is an internationally published author on research pertaining to self-harm and suicide prevention. She is currently working as the Senior Scientific Communications Associate at McCann Health, India.

We have interviewed three persons like her as part of our series on International Non-Binary People’s Day. This is the first interview in the series.

When and how did you realize that you are different from what others perceive you to be? How did you feel about it and what thoughts went through your mind?

Kasturi Chakraborti: To answer this question, I must go back almost 24 years back. The first time I knew I was ‘different’ in colloquial terms but didn’t consider myself different was when I was in kindergarten. I remember my teacher queuing us up for some sort of outdoor event, and there were two queues that she made – a girls’ lineup and a boys’ lineup. I promptly, without even thinking joined the boys’ lineup because I felt much more resonant with how little young boys behaved than little girls in terms of my clothing, my playing patterns and choice of toys (I mean my favourite toy was a yellow laser gun gifted by my dad, it was so obvious.). As a preadolescent, in school around 3rd and 4th grade, I would develop the biggest crushes on my female teachers, always having the age-old feeling of butterflies in my stomach when I would get to interact with them. But then came in adolescence, and as a teenager of the 2000s, being ‘gay’ or acting like a ‘lesbian’ was considered behaviours of ridicule and joke. So, as I grew up from a 14-year-old to a 16-year-old, watching my friends develop young crushes and fall in love with their opposite sex in school, I instead retreated completely considering I was popular in school and didn’t want to be someone who could be bullied or made fun of in any manner, I was scared I would be the source of jokes for those people who would look up to me and completely be bereft of any friends or company, not to forget facing the wrath of temper from my family and the subsequent humiliation or violence I had to bear from both ends. That meant, the crushes that I developed on many of my friends who were girls, I had to convert them externally into bonds of friendship to avoid confronting my identity which at one time I would involuntarily project when I was a child, I forced myself into seeing myself as a feminine human being, growing my short hair and changing my favourite outfits of baggy shirts, shorts and sneakers to uncomfortable skirts, ridiculous heels and wearing long hooped earrings. Strange how society turns us into scared timid people. But days, months and years went by and I stayed in willful denial, even when in an incident in 11th grade, a very sweet girl in my academic coaching centre professed her interest in me. I instead disrespected her feelings and ran away in disgust. I still regret that to this day. But then college came, and the identity that I kept suppressing out of societal fear, started to push my seams. Me living a lie as my life took a toll on my health. I became clinically depressed and developed generalized anxiety disorder trying to pretend loving people I had no feelings for. And then, Parvati (name changed) happened. We were both in dental school together, and I developed such an intense friendship with them. One day my entire mind, body and soul growled out that I was in love with them. But if you’re in medical college and living in the hostel for the entire time of 5 years, your social circle drives your life. So, me still not having the courage I kept looking for, saw Parvati (name changed) get swept by a male friend of mine in front of my eyes, and my feelings thrown down the drain. When that happened, suddenly I went into that flashback of me rejecting the advances of that girl in school all those years ago, for now, I understood the unending pain of heartbreak and its constant repetition. My health started to deteriorate even more, and when I slowly attempted to disclose my identity to my roommate of 5 years and the person I thought was my friend, I was met with emotional manipulation, not just from her, but most of the entire social circle I had in college. So, after turning into an alcoholic at the age of 22, and completely losing sight of myself professionally and personally, one rare day, I stood in front of my mirror and just blurted out “I am not straight, I like girls, not boys and will never like them the way I feel about feminine human beings”. That’s how my journey of coming out or actually coming to be myself started.

Kasturi Chakraborti: I don’t think any single person who identifies as LGBTQ+ has had a life without facing any discrimination or stigma; for we as humans anthropologically stand at the fringes of society or what the majority of humans deem society to be if I am honest. I too have had several, uncountable encounters with family, friends and acquaintances.

The first instance that comes to my mind when you ask me about incidences, is when I first came out to my parents. At the age of 23, had written a letter via email to my father in confidence, for he somehow understood I was going through something grave and destroying myself in the process. Among both my parents, my father has always been the one who has been more understanding, more patient and takes his time with passing judgements on people. My mother was quite the opposite. With her missionary school upbringing, she always had an outlook on life that was black and white, and if it fell in the grey it was equally as deviant as the black to her. So this email, that I’d sent to my dad in confidence, writing for the first time about my truth, by some accident went into my mother’s hands. And before my father could read the email, my mother read it, and immediately after called me on my phone, bawling her eyes out. “Don’t indulge in all such grotesque practices, I gave birth to a normal child, don’t be abnormal and come out of this phase. These are terrible things to be a part of, I didn’t raise you to be involved in all this.” My heart, soul and self-respect shattered right then and there, on the other end of the phone while I was listening to my own mother say this about her child. Now almost 6 years since that incident, although both my parents have turned a corner and how and are my biggest supporters, but yes things said by parents always stick to the heart permanently.

Another incident or one can say the situation is of my roommate in my undergrad I was talking about in the previous question. At the same time, I’d sent that fated email to my father, I had started to confide in my roommate considering we had been friends and had lived together constantly for 5 years. When I started to share my internal struggles, unreciprocated feelings, and love for people of the same sex/gender with her, without me realizing consciously at that time, my roommate started to manipulate and demean me inconspicuously to gain sadistic pleasure. She would use the term ‘lesbian’ derogatively and always imply that since I am a ‘lesbian’ I am a freak, and at risk for being out to others. Instead of being consoled for the losses I was enduring, she turned the narrative and made it as because I was not straight, this is bound to happen, and it will. Even after college ended, she would text me similar homophobic stuff as apparent “jokes” during our postgrads. We were both living in different countries, and I had started to come out publicly, she continued not just posting things on her social with occult homophobic messages in them but poking me into feeling worthless with her abrasive messages to me. When we were in college, because of the environment and living in constant proximity with people like her (she was not the only one) I was in the delusion that these people were accepting when in reality, they had pushed me further into the closet for their own insecure sadistic pleasure.

How can family, friends, relatives, colleagues support you and what message you want to give to them?

Kasturi Chakraborti: My only message to friends, family and the social circle of young adults who belong to the LGBTQ+ community, is to not pass your judgement so soon. Give them the time to tell their truth, God knows we all owe that to each other and give yourself the time to see the other side of the coin, the other side of the grass. Because words that you say in immediate response to something you don’t wish to be true just for a convenient stand in the society, can be the bullet or the trigger that could cost your son/daughter/brother/sister/colleague’s life, and if by misfortune that happens or begins to happen, you will evermore have blood in your hands. People with an LGBTQ+ identity are exactly the same as you, they love who they love, just like you, and cannot be forced to love and be someone they are not, just like you.