The COVID-19 pandemic through a transgender person’s lens

Home > Resources > The Latest > The COVID-19 pandemic through a transgender person’s lens
Story
Deeksha Mishra 20 May, 2021 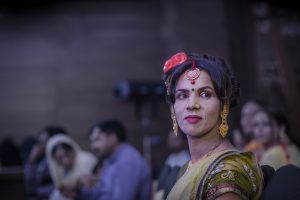 Manisha (name changed), a resident of Jamshedpur, Jharkhand, has been living alone for almost a decade owing to alienation from her family who were not ready to accept her identity. After leaving home, she underwent social transition and embraced a feminine identity. However, this was met with a lot of friction, whether it was concerning livelihood opportunities or the general conduct of the public. For years, she has been maneuvering through a number of low-paying jobs such as workings in the NGO sector, toli badhai (money received when congratulating families for special occasions such as weddings and births), sex work and begging, most of which are daily wage options. She has been surviving with bare minimum resources and an overwhelming number of hurdles in acquiring the basic means to survive. However, as she narrates, she had been learning the art of getting by and was trying to build up towards a better life by slowly accumulating some savings, until the coronavirus pandemic hit.

The COVID 19 pandemic, which spread through the globe towards the beginning of the year 2020 affected people from almost all sections of society. However, the drastic effects of the pandemic were disproportionately distributed. Populations that lacked the resources that were considered to be most important in maintaining and regaining stability during this unprecedented time were left to struggle for survival for months. According to a report presented to the UN General Assembly on ‘The Impact of the COVID-19 Pandemic on the Human Rights of LGBT Persons’, a considerable section of the transgender community faced significant damage as the pandemic had disproportionate impacts upon different sections of the society.

Galtung (1969), in his concept of ‘structural violence’, addressed the idea that the structures that uphold the various forms of stratification within our society tend to place certain communities at the sidelines, and multiple limitations including the struggle for access to the resources available stand between their actual condition and the desired potential life. Such structures relegate the transgender community to the society’s margins and a large section of them try to earn a living through begging and sex work, as substantiated by a study by the National Human Rights Commission conducted in 2018.

The stay-at-home directives and nationwide lockdown that were imposed as the pandemic rapidly began to spread, had left Manisha to struggle for survival every day as all of her livelihood options were dependent upon her presence in public places. As people were not present in market places and her movement was also regulated by the local authorities, she could not go to the markets and other hotspots for begging, and the citywide shutdown of public transport systems such as buses and trains added to the issue. For months, celebratory and religious gatherings were not allowed and those that did organise them at a smaller scale, due to COVID related apprehensions and restrictions, did not allow Manisha and her toli to join in for blessings as was previously done for such occasions and celebrations.

With her usual daily income of around Rs. 300-400/- being reduced to a meagre Rs. 50-60/- during the lockdown, the major source of sustenance for Manisha and those she lived with was the dry ration that was distributed by several stakeholders such as private parties, CSR initiatives of corporate and industrial houses, the NGO sector, as well as the political leadership of the area.

Alliance India’s Wajood programme contributed towards strengthening this supply of ration and other protective measures including masks and sanitisers by organising for their distribution to the community through the CBO, Subhkamana Foundation, the programme implementation partner in Jamshedpur. The unforeseen circumstances had greatly affected the dispense of the services extended by the CBO as the outreach workers were unable to travel long distances to reach community hotspots and community members had no resources to travel to the offices. However, the outreach workers pushed their limits to extend COVID-19 related services to the community in whichever way possible and in making sure that HIV interventions continued uninterrupted.

However, according to Manisha, as resources were limited and were to be extended to a large number of people, with the lockdown that kept on extending indefinitely, she not only faced adversity in the form of lack of sufficient food but also hopelessness and fear about the immediate future. Although the pandemic had not spread among those she interacted with, there was a panic regarding the unknown nature of the virus. However, the CBO outreach workers assured the community of all kinds of possible support in case of a member having been tested positive. They organised drives to distribute ration, masks, soaps and sanitisers and educated the community about the precautionary measures that could be taken, and thus attempted to alleviate some of the anxiety.

Other issues added to Manisha’s misery including a lack of sufficient space for proper social-distancing and the lack of continuous water supply in the place of residence. As she was unable to support herself due to the unavailability of alternative livelihood options, she was left to completely rely upon the resources being distributed. As she had also been involved in sex work and was partially active with it during the lockdown, there was the added concern of getting affected by the virus through her clients.

As the pandemic continues, passing the one year mark, and has been gaining momentum in various regions at various times, it is imperative that drawing upon past experiences, arrangements for resources are made accordingly, so that they are sufficient enough to be able to meet the needs of the community, and are distributed more efficiently.

Alliance India has been implementing project Wajood (which means essence or identity) with support from Amplify Change since November 2015 reaching more than 10,000 TGH for providing HIV sexual health services including support in feminisation, mitigating gender-based-violence and linking to social welfare and entitlements. Wajood project is implemented with local partners in six states – Basera Samajeek Sansthan in Delhi, Lakshya Trust in Gujarat, Alliance India’s regional office in Andhra Pradesh and Telangana and Sangama Trust in Karnataka.