Charity begins at home but shouldn’t end there! 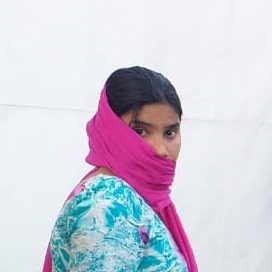 Guddu aka Aarti who turned 25 this year lost her mother during her early years after which her father had remarried. There are seven members in her family. Aarti is from Virar in the state of Maharashtra but due to family issues related to her sexuality she had to shift to Delhi. From the past several years, she has been living in the Trilokpuri area of East Delhi, that has a number of transgender people residing alongside. In this locality, she receives support and inspiration from her community members, most of whom are living away from their biological families.

Aarti faced a lot of problems since childhood. After her mother had passed away, her stepmother disliked her and used to discriminate against Aarti because of her feminine behaviour. Aarti clearly remembers the pain she went through during her stay with the stepmother. She had to live with little food, no schooling and was made to work as a child labourer by her stepmother. Aarti could not bear this for long and had to come to Delhi at the age of 18. After coming to Delhi, Aarti faced challenges of survival and basic necessities. However, over a period she got in touch with other transgender community members and from there on, her actual life journey begun.

Aarti currently makes her ends meet as a sex worker. Recently after she was diagnosed with HIV infection, she started begging near Anand Vihar Bus stand. Begging also is not an easy job since she faces problems from local police and goons. She has to give a sum of some part of her daily earning to her Guru who in return takes care of her.

She is unable to go for begging due to the imposition of lockdown because of the COVID-19 outbreak which has made her mentally and emotionally disturbed. Due to lack of money, she is not able to get food, medicines and other essentials which makes her situation more difficult, especially with her immunity levels falling every day.

Being a transgender who is HIV positive living alone especially in the times of COVID-19 in itself poses challenges and risks. The first toll was on her mental health wherein she started to feel lonely and helpless since she is alone and there is no one to take care of her. “Had I been “normal” like everyone, my family would have been with me today, nor would I have been infected with HIV”, Aarti laments. She started blaming her immediate transgender family as well as her biological family for her present condition expressing that how she would have loved to lead a ‘normal’ life and earned a living by doing a job.

Ramkali from Basera Samajik Sansthan (associated with the Wajood programme of Alliance India) was informed about Aarti’s condition. Ramkali met her personally and consoled her while she was crying and expressing her grief. Her main needs were ART (antiretroviral therapy) medicine, nutrition support, economic and mental health support. Ramkali counselled her gave her an assurance that she will always support her in any situation. Ramkali facilitated two months of ART medicines from Lal Bahadur Shastri Hospital, Delhi and also organised food from a nearby Gurudwara daily. She also linked Aarti to her entitlements for economic support under the Transgender scheme run by NISD (National Institute of Social Defence).

Aarti has finally received the support she needed. She said that only a transgender can only understand the problem of another transgender. Aarti had given up hope of any help coming to her. When Ramkali sees happiness in the eyes of Aarti, she is filled with joy.

The fact that someone came forward to help Aarti makes her happy and hopeful for the future.

In the end, it is about the families for transgender communities. Had they been accepted and loved by their biological families they would have not faced immense stigma and discrimination in every walk of life. A lot of transgenders on streets begging or engaged in sex work, in trains or redlight areas have an inevitable history of family fallout due to perverse social norms.

Awareness, mainstreaming and normalization of gender issues right from childhood is the need of the hour so that individuals are not discriminated further in various spheres of their lives.

Basera Samajik Sansthan (Partner of Alliance India) has so far supported 282 community members based in Delhi with food and nutrition, ART medicines, counselling and linking them with various transgender economic support schemes run by the Government of India.