Home > Resources > The Latest > Breaking the chain of sexual oppression in the times of COVID-19
Blog, Story
Anurag Paul 23 April, 2020 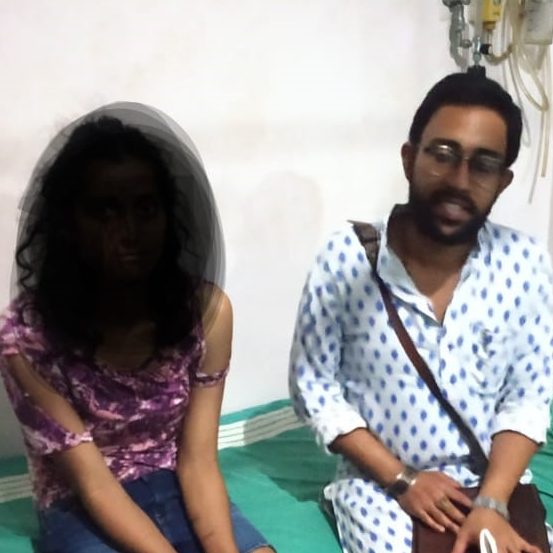 Anya with Samarth staff in the hospital.

Rohan Mathews works as Clinic Manager for the Samarth programme of Alliance India in Bangalore. He identifies himself as a gender-fluid, pansexual person. He has been working with Samarth since November 2019.

Rohan shares the travails of three transgender women who went through their share of inferno, being stuck in a foreign state amidst a lockdown and a deadly virus on the kill.

Ever since the lockdown across the country was brought into effect, the queer community is by far adversely impacted than any other group. With no family to support or a kind soul to talk to, the intersection of their suffering is a tale which must be documented and resolved.

Samarth in Bangalore was recently approached by a 22 years old transgender woman, Anya (name changed) who was stuck with no shelter nor food and had been sleeping on the road for three days. Anya is UK citizen of Indian origin. She had finished her schooling in India and had begun her transition process a few years ago with the help of NGOs in Delhi. Anya had been repeatedly sexually abused and gang-raped in Delhi on multiple occasions throughout last year, which made Delhi a place of horrors and made her feel unsafe. It was following these episodes that she decided to come down to Bangalore, to feel a little closer to home in South India. This helped because she had a few school mates willing to help her out. Once she was in Bangalore, she realised that her friends could not shelter her for much time and she finally ended up on the road with little support. This is when she received Rohan’s number from one of her friends. She got in touch with Rohan enquiring if Samarth could help her out. Rohan immediately got on a call with Anya and pacified her by telling her that he would stand with her and help her. Personally, for Rohan, it was devastating to see the helplessness of someone who had been raped multiple times. Rohan knew that she was in dire need of therapy and counselling.

Her friends had been forced to abandon her because of their own limitations during the lockdown. Unemployed and shelterless, she needed a roof over her head and food to eat. In distress, she had consumed a large dose of sleeping pills and was in immediate need of medical supervision.

During the same time, Samarth clinic received a distress call from two more young transgender women – Neeraja and Radhika (name changed), who are below 26 years in age. They came from the underprivileged section of the hijra community and depended on sex-work/begging for sustenance. Neeraja and Radhika together were living together as sisters from the same hamam (household where hijras live as a family). After the corona outbreak, their house owner began harassing them alleging that they were the harbingers of corona virus. Later they were forcefully evicted from their rented house. Because of the activities of Samarth with the community at the grass-root level in Bangalore, they were able to get in touch with Rohan, via a friend who had previously accessed Samarth’s services. Having worked with mobilisers from the hijra community, Rohan could see the space that they were coming from, it was truly a real-life example of how the marginalised communities get even more oppressed in times of emergencies and distress such as this.

It was crucial to find for them a safe space that was sensitive to their culture, lifestyle, and their situation. Rohan coordinated with Dr. B.R Ambedkar Medical College Hospital and admitted Anya to the hospital with the help of Hennur Police Station staff. Rohan then arranged the necessary treatment seeing that she was semi-conscious. She was thoroughly checked for any other symptoms. She was referred to a psychologist for therapy and was put into a safe home provided by a kind person, who refuses to be named. Rohan has been regularly following up with her and she has been further referred to NIMHANS after the lockdown, to address her mental health issues.

Neeraja and Radhika were subsequently put in touch with Thanushree, Samarth’s field mobiliser, who is from the Hijra community. They are provided with food three times a day and emotional support by Thanushree. Mangala, another Samarth counsellor is in regular follow up with them to identify if they have any requirement for further assistance. They now help Thanushree distribute food for the destitute on behalf of Samarth.

All of them express their gratitude for being supported in an hour of danger and crisis, such as this. They have promised to volunteer with Samarth in every opportunity possible, as a way of expressing gratitude. Rohan could see the happiness that lit up their faces when they were finally with their own people. It was an emotional experience of witnessing the power of togetherness and the concept of chosen families. Especially when someone comes from marginalised community from an already oppressed section.

For Rohan, this is a crucial reminder of the community’s ability to empower and support unconditionally, as long as they stand together. This being the key motto of Samarth Bangalore, the impact of this crisis has left ripples of change in the way NGO’s need to function and have brought forth the importance of being there for each other. Interestingly, Rohan also saw how Samarth had become a name and an identity across different sections of the queer spectrum, demonstrating the dire need of platforms like Samarth to exist in places like Bangalore.

Alliance India’s Samarth Project is a community-led programme on HIV screening and treatment linkage for men who have sex with men (MSM) and the transgender (TG) communities. The programme is being implemented in six sites of priority states of India that includes South Delhi (Delhi NCR), Hyderabad (Telangana), Bangalore (Karnataka), Jalandhar (Punjab), Vadodara (Gujarat) and Hooghly (West Bengal). Acknowledged as a successful community-based HIV screening model in the country, the programme has screened more than 11,000 MSM and TG people during the first phase (June 2016 -September 2019). In the second phase (starting from October 2019), Samarth is aiming to establish differential service approach for more at-risk MSM and TG communities with higher risk association (multiple sex partners, substance use and susceptible to violence).